At Moffett Field in Mountain View, Calif., Lighter Than Air (LTA) Research is floating a new approach to a technology that saw its rise and fall a century ago: airships. Although airships have long since been supplanted by planes, LTA, which was founded in 2015 by CEO Alan Weston, believes that through a combination of new materials, better construction techniques, and technological advancements, airships are poised to—not reclaim the skies, certainly—but find a new niche.

Although airships never died off entirely—the Goodyear blimps, familiar to sports fans, are proof of that—the industry was already in decline by 1937, the year of the Hindenburg disaster. By the end of World War II, airships couldn’t compete with the speed airplanes offered, and they required larger crews. Today, what airships still linger serve primarily for advertising and sightseeing.

LTA’s Pathfinder 1 carries bigger dreams than hovering over a sports stadium, however. The company sees a natural fit for airships in humanitarian and relief missions. Airships can stay aloft for long periods of time, in case ground conditions aren’t ideal, have a long range, and carry significant payloads, according to Carl Taussig, LTA’s chief technical officer.

Pathfinder’s cigar-shaped envelope is just over 120 meters in length and 20 meters in diameter. While that dwarfs Goodyear’s current, 75-meter Wingfoot One, it’s still only half the length of the Hindenburg. LTA expects Pathfinder 1 to carry approximately 4 tonnes of cargo, in addition to its crew, water ballast, and fuel. The airship will have a top speed of 65 knots, or about 120 kilometers per hour—on par with the Hindenburg—with a sustained cruise speed of 35 to 40 knots (65 to 75 km/h).

It may not seem much of an advance to be building an airship that flies no faster than the Hindenburg. But Pathfinder 1 carries a lot of new tech that LTA is betting will prove key to an airship resurgence.

For one, airships used to be constructed around riveted aluminum girders, which provided the highest strength-to-weight ratio available at the time. Instead, LTA will be using carbon-fiber tubes attached to titanium hubs. As a result, Pathfinder 1’s primary structure will be both stronger and lighter.

Pathfinder 1’s outer covering is also a step up from past generations. Airships like the 1930s’ Graf Zeppelin had coverings made out of doped cotton canvas. The dope painted on the fabric increased its strength and resiliency. But canvas is still canvas. LTA has instead built its outer coverings out of a three-layer laminate of synthetics. The outermost layer is DuPont’s Tedlar, which is a polyvinyl fluoride. The middle layer is a loose weave of fire-retardant aramid fibers. The inner layer is polyester. “It’s very similar to what’s used in a lot of racing sailboats,” says Taussig. “We needed to modify that material to make it fire resistant and change a little bit about its structural performance.” 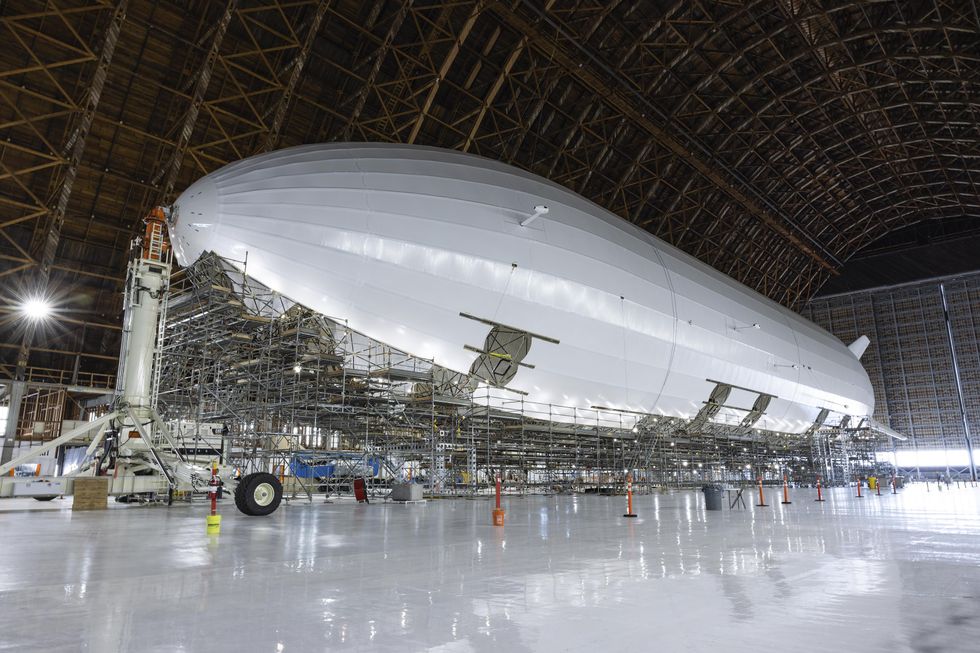 But neither the materials science nor the manufacturing advances will take primary credit for LTA’s looked-for success, according to Taussig—instead, it’s the introduction of electronics. “Everything’s electric on Pathfinder,” he says. “All the actuation, all the propulsion, all the actual power is all electrically generated. It’s a fully electric fly-by-wire aircraft, which is not something that was possible 80 years ago.” Pathfinder 1 has 12 electric motors for propulsion, as well as four tail fins with steering rudders controlled by its fly-by-wire system. (During initial test flights, the airship will be powered by two reciprocating aircraft engines).

There’s one other piece of equipment making an appearance on Pathfinder 1 that wasn’t available 80 years ago: lidar. Installed at the top of each of Pathfinder 1’s helium gas cells is an automotive-grade lidar. “The lidar can give us a point cloud showing the entire internal hull of that gas cell,” says Taussig, which can then be used to determine the gas cell’s volume accurately. In flight, the airship’s pilots can use that information, as well as data about the helium’s purity, pressure, and temperature, to better keep the craft pitched properly and to avoid extra stress on the internal structure during flight.

Although LTA’s initial focus is on humanitarian applications, there are other areas where airships might shine one day. “An airship is kind of a ‘tweener,’ in between sea cargo and air freight,” says Taussig. Being fully electric, Pathfinder 1 is also greener than traditional air- or sea-freight options.

After completing Pathfinder 1’s construction late in 2022, LTA plans to conduct a series of ground tests on each of the airship’s systems in the first part of 2023. Once the team is satisfied with those tests, they’ll move to tethered flight tests and finally untethered flight tests over San Francisco’s South Bay later in the year.

The company will also construct an approximately 180-meter-long airship, Pathfinder 3 at its Akron Airdock facility in Ohio. Pathfinder 3 won’t be ready to fly in 2023, but its development shows LTA’s aspirations for an airship renaissance is more than just hot air.

From Your Site Articles

Related Articles Around the Web A Handful of Resources for Computer Science Education Week